You may have missed it, but August was National Coffee Month. Now who thought of choosing the middle of summer for celebrating a beverage traditionally served piping hot? Big iced coffee, no doubt. Or maybe it was a political choice in response to the proliferation of cold brew over the past few years. Either way, if you missed out on the celebrations, you’re in luck. National Coffee Day is September 29. And to make things even more confusing, the International Coffee Organization (ICO) declares International Coffee Day to be October 1. They even have themes for each year— 2018 was “Women in Coffee”. And while the ICO seems like they’ve got the most credibility here, we’re not about to thumb our nose at unsanctioned coffee days.

With all the talk brewing about coffee and cooler weather now upon us, we feel confident declaring that we are now in Coffee Season. And to mark Coffee Season 2018, Cobb is releasing a short office coffee guide. This is by no means an exhaustive list— we’re just scratching the surface here. But the idea is to present a few methods of brewing coffee that are office-friendly, meaning you’ll just need hot water, coffee, and the brewing devices themselves. We could get into kettles, temperatures, weights, and measurements and tiny variables that any self-respecting coffee snob would spout out. But the aim of this article isn’t to get that deep, but rather to explore methods of brewing coffee beyond the traditional drip. 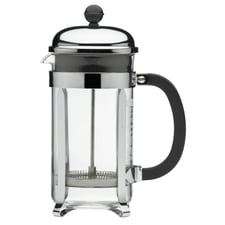 The French press— or “Freedom press” circa 2003— is device that is well known for its portability and versatility. With this method, you combine coffee grounds and hot water (about 30 g of coffee to 500 ml of water) in the container, making sure to stir when pouring the hot water into the grounds to avoid dry pockets. After letting the mixture sit for four minutes, the plunger is pushed down to separate the coffee grounds from the now-coffee. The unique thing about the French press is that the mesh on the plunger creates an emulsion of the coffee oils and water, which provides a satisfying cup of coffee with a slightly richer or heavier feel than your standard drip cup. Now, there are different recipes and tips you can find online about making the best French press coffee, but the basic steps above are mostly failsafe. This device is also very easy to clean, as it just has two parts. They even make metal and plastic versions made for camping or traveling, so you can take your press anywhere you go! As a bonus, this device can also be used to brew certain types of tea and is great for making salad dressings. 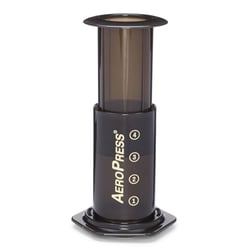 The Aeropress is similar to a French press in that it involves allowing coffee grounds and water to freely mingle until you manually press down on the plunger. For one cup, you’ll want to hit about a heaping tablespoon of grounds (16.5 grams) to about a cup (250 ml) of water. To start, rise the circular Aeropress filter in the holder and assemble the pieces. Add the premeasured coffee and pour in a small amount of water to allow the grounds to bloom. After a few seconds of letting the grounds do their thing, pour in the remaining water and stir the mixture (try using a chopstick or utensil that won’t stretch the sides of the Aeropress. Let mixture sit for about 20 seconds and then sloooowly press the plunger down over the course of about 60 seconds. Take your time on the last step! If you push too quickly, your coffee will taste weak and you might have coffee slurry all over your counter. 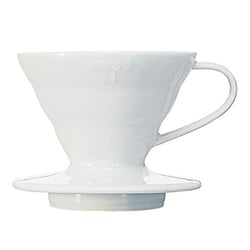 The pour-over is perhaps the simplest way to brew your morning cup. It involves the pour-over itself, a cup, water, beans, filter and gravity. With a pour over (the Hario v60 is a common model), you’ll first put the paper filter in the device and pour some hot water in the empty filter to wet the paper and warm your cup (discard this water). Next, add your coffee grounds (about 3-4 tablespoons or a heaping scoop using the provided measuring device). After you level out the coffee, pour in about ¼ cup of hot water (60 g) and allow the grounds to bloom for about 30 seconds. Then, slowly pour about 1 ¼ cups (300 g) of hot water over the grounds in a circular motion, making sure to wash away the grounds near the rim of the filter (don’t wash over the edge of the filter or you will get grounds in your cup!). This method works best with a swan-neck kettle. 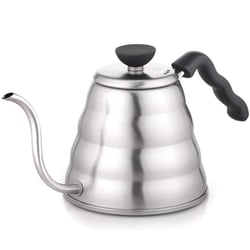 So, if you’re looking for a different coffee brewing method to bring out different flavors or textures, give some of the equipment above a shot. And if nothing grabs you, there are a myriad of other ways to brew coffee, with new innovations coming out all the time (believe it or not). And of course, if you still love your Mr. Coffee drip— more power to you! The goal is to enjoy your coffee and establish a nice ritual as a break in your hectic day. Despite what that mustachioed barista may tell you, there is no wrong way to drink coffee.