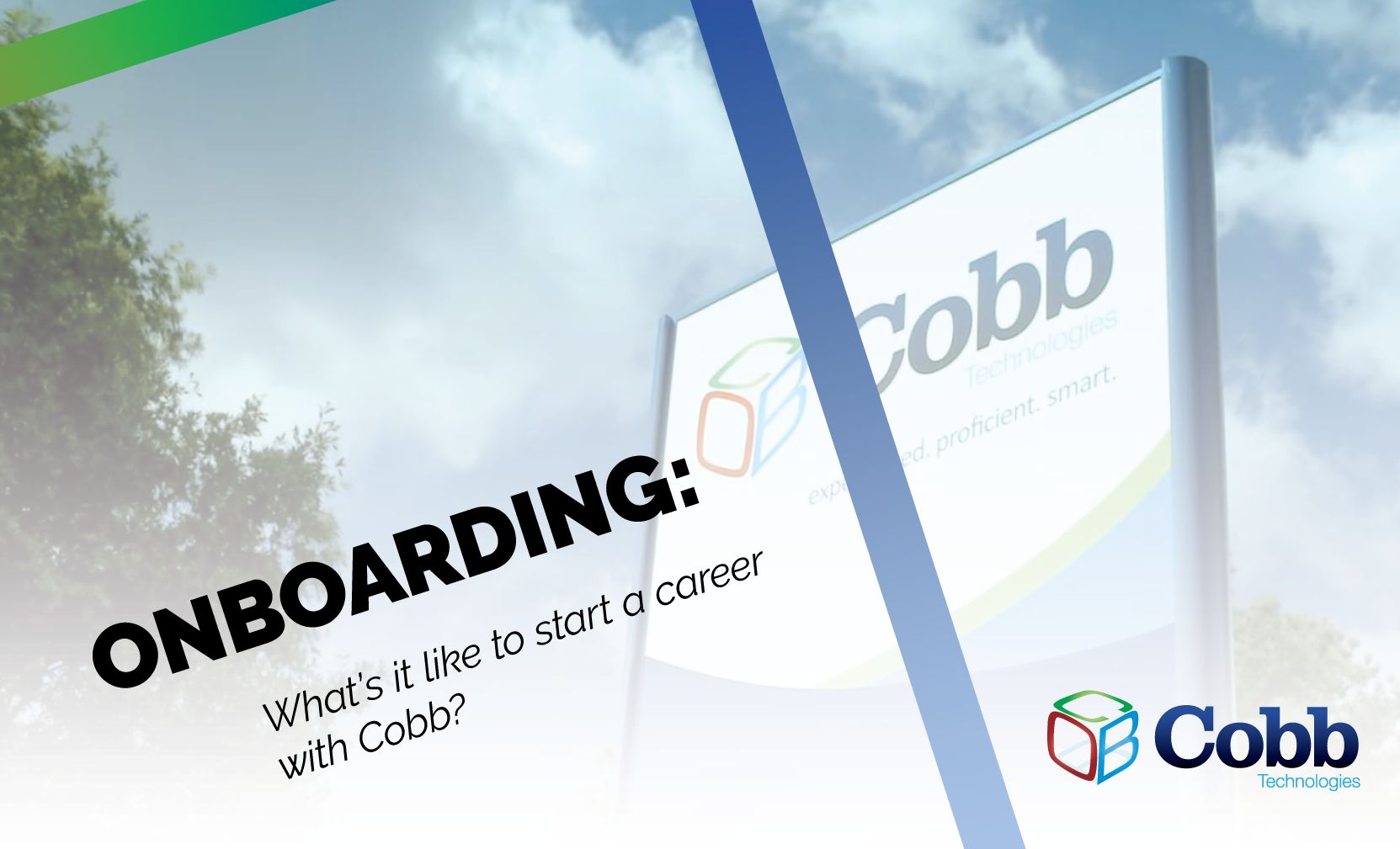 Welcome to part 3 of our onboarding with Cobb blog series. Click here for parts 1 and 2.

In this interview, we speak with Evan, a Business Improvement Specialist here at Cobb Technologies. Evan has worked with Cobb for almost two years, and is a top performer in his role doing sales for the company. Evan, however, did not come from a sales-experienced background, but through the support and education provided by his team, was able to make his mark.

To learn about Evan’s journey from working as a bartender to ultimately being a member of the team dedicated to creating a memorable first day for all of Cobb’s employees, read on.

How did you find out about the position?

I got hired through word of mouth, and started in the hunter role. My focus was 100% new prospective clients, and I did that for four months. Over those four months and a week, I was constantly training with Geri’s (Regional Sales Manager) help.

I had never heard of Cobb, even though I worked for one of Cobb’s customers.

Where did you work before?

A country club, hospitality. So I was mainly a bartender, and a server. The few times I would go into the office, I would see [the copier], but I would never go, "Oooh, what type of copier?” Or, Who services it?”

I never imagined I’d be here, but Geri knowing my skills as a communicator, she convinced me to try it out. So I did a ride along with Travis (Production Print Manager) before I even got hired, had some conversations with Kevin (Vice President of Sales) and Geri, and then I had my actual interview and filled out the online application and personality test.

What were the conversations you had before you filed the application about?

They were interested in learning how I felt about the job. They asked me a few questions: How was the ride-along? Do you see yourself doing this kind of thing day-to-day? Did you like the people you were introduced to? Could you see yourself working here? It was all pretty informal and relaxing.

How long was the time period between you submitting your application and your first interview?

It was a short amount of time. I feel like I had done the vetting prior to filling out the application. My situation was a bit unique because I was asked to apply for the position.

It was cool, because Travis was already there, and I remember walking through the bull pen,” and saying Hi,” to people I had met previously, and just talking about sports and joking around. It was Geri and Kevin who went over my role, my compensation, stuff like that. It was very comforting, but professional, nothing out of the ordinary, and we decided to move forward from there. Overall, the whole interview was about an hour.

What was the time between your formal interview and your job offer?

All of this happened within a week. I reached out to Geri on a Saturday, I came in that Monday, filled out the application in that week, had the formal interview late in the week, and by the next Monday had an offer.

Was your first day with the ambassadors?

Yes. I was hired on the same day as Tony, so we started together. We had our first day with the ambassadors, and we had a great time with them. That was back when it didn’t have to be as socially distant and virtual, and it was awesome. I was meeting different people from different departments, that I hadn’t met previously, even some on the sales staff that I hadn’t even met.

I really enjoyed the process actually, and that’s ultimately why I decided to join the Ambassador team. I went out with the service techs for a few hours, and I liked that a lot. I continued to do that for a while - any time I had free time I would go with the service techs to get extra training outside my department.

On the second day at Cobb, I finalized my paperwork, and started online training for the manufacturers, and meeting with different regional managers. A lot of it was with Todd (Regional Sales Manager), because Todd was building up his team at the time. After about the second day, it became morning was training either hands-on or online, and then in the afternoon it was get out there with a rep or service tech, and learn that way. It was good —  I learned very quickly, and learned enough to sell. My first sale was ten or eleven days in.

Of course, Geri helped a lot, because I had limited experience with filing paperwork at that point. Geri was filling out the paperwork while I was walking the customer around on the demo, discussing pricing and functionality — I could do that. I could communicate, but I was still learning how to do paperwork.

How long did it take you to feel like you really knew what you were doing?

Definitely ninety days. In that last month, I was really rolling, and of course it’s December, so in our industry, if you didn’t have anything in the first week, it’s going to January or later anyway, so I used that time to just call on a lot of perspectives. At that time I had no clue I was getting accounts in January, so I was just move move move. And by that point I had a feel for how to talk to a customer, how to make those calls, how to demonstrate value in our equipment and services.

Yeah — in college, for two summers, I devoted a month out of my schedule to be on the orientation team for college, to be part of that first experience for freshmen, because I really enjoyed it and because I had a great experience in that position. So translating that to Cobb, I had a great experience that first day. I felt welcomed, I met people, those same people remembered my name, said Hi,” to me if I saw them later on, whether they were on my team or not. And it just brought back that feeling of the fact that the first impression is so critical, and I had a good one.

I want to be a part of hopefully giving that to someone else, if given the opportunity. And you don’t necessarily have to be on the ambassador team to do that, but I was asked to join, and I said, Absolutely!”

I’ve only gone through a number of on-boarding jobs in my life, and I would say this was the first one for a “career”, and the other ones were nothing to write home about. But I could just attribute that to they were more just a transactional job, and not a career, and they’re hiring people that aren’t necessarily going to come back after a year.

Where as regardless of what position you’re getting into at Cobb, we hope you want to stay for a long time. So it’s a little bit more critical to deliver that first impression.

If you had any advice for someone who is applying to Cobb, what would it be?

Well, do it! I’m a big proponent of — even if you’ve never done something — do it, and you’ll learn it and figure it out. I think it was very gracious of Geri to tell me to trial it, to just come try. My advice is to just do it. Or, if you’re looking for a career, it’s a good one.

What’s your favorite part of the job?

Well, for my role specifically, I like interacting with strangers, because I just like talking to people and learning about them. But my favorite part about the company, I guess it’s along the same lines — I like the people. You know, regardless of where they work, I’ve been able to make connections with almost every single employee. At least in Richmond, at least know their name and a couple things about them, and be in a relationship to say, Hi,” and stop to catch up.

It’s a good company to work for, leadership really values how you feel, rather than just how you’re just performing.