Does My Office Need an MFP or a Printer? 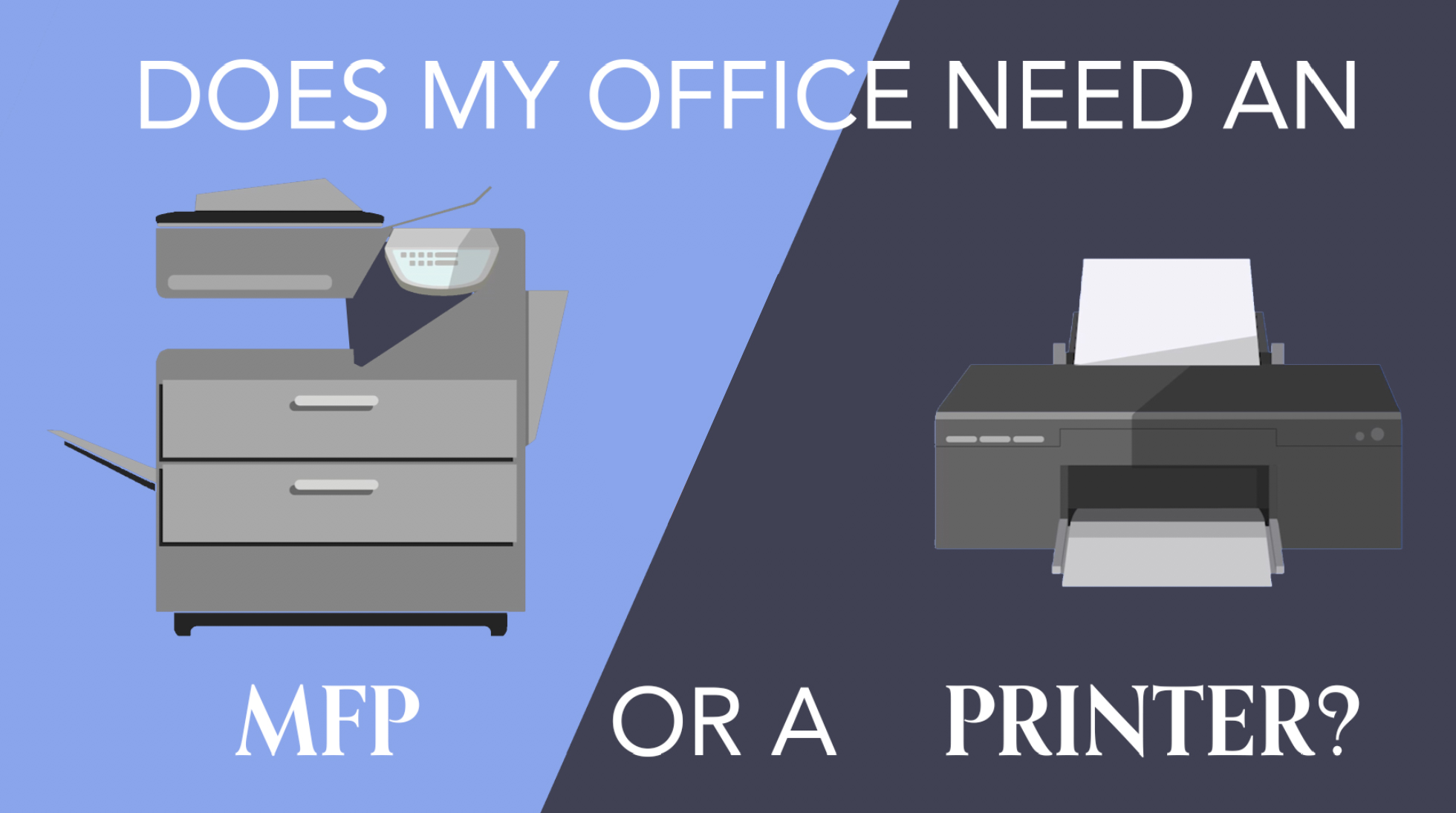 There’s a definite overlap between the abilities of an MFP and a printer, but which do you need? Let’s compare the two! Printers have been around forever, and they are single-function printing devices. They print on paper or any other approved substrate.

WHAT IS A MULTIFUNCTION PRINTER?

An MFP is like a large, suped-up printer - it has advanced features that can streamline your workflow. A basic MFP will be able to scan, copy, print, fax, and email documents.

MFPs also have the ability to support a multitude of additional, innovative features. Konica Minolta’s bizhub MarketPlace, for example, offers a connector app for finance, allowing users to display stock quotes right on the control panel.

WHAT DO I NEED TO CONSIDER?

When choosing between a printer and an MFP, consider your current situation and needs, as well as what you may need in the future.

CURRENT EQUIPMENT
Do you have a separate fax machine, copier, scanner, and various single-function printers peppered throughout your office? Are all these devices getting a lot of use? Would it make sense to consolidate these devices into a centrally located MFP unit that can be used by all your employees?

WORKFLOW
What does your workflow look like? Can it be streamlined? With an MFP, you don’t have to move between machines to quickly get the results you want - MFPs allow you to digitize your paper documents and add them to your workflow almost instantly.

Do you typically need to scan documents to your computer, and then email them out to a third party? An MFP could shave some time and effort off of your more tedious tasks by allowing you to scan a document and then send it off directly through the MFP.

OFFICE ENVIRONMENT
What does your office space look like? MFPs can be pretty bulky, however, they can do the work of multiple machines. Rather than having a fax machine, printer, and copier languishing on separate countertops, you can instead have a single standalone MFP.

COST
Consider your budget, including the cost of future consumables such as toner as well as your energy bill.
While standalone printers are less expensive than MFPs, they generally have a higher per-page-cost than MFPs, meaning that if you use your printer frequently, the cost of a printer will eventually equal the cost of an MFP.

MFPs are typically less expensive, and much easier to fix compared to printers. Printers often use delicate plastic pieces that are difficult to replace, and once they’re broken that usually spells the end of that machine’s life. MFPs use robust parts that are easily replaced and repaired.

SECURITY
Printers generally sit at a single user’s workstation - meaning that outside access is limited and the information that goes through the printer is more secure compared to an MFP that sits in a common area and is used by a large number of people.

MFPs come with baked-in security features. Canon, for example, uses Verify System at Startup, which runs through the boot code, checks for malware intrusion on applications using a Canon proprietary signature, and then initializes virus scanning protection that continues to run on the machine while it is on.

Other features include secure release printing, which allows users to send a print job to an MFP, but not print the document until the user goes up to a unit and verifies their identity.

To properly secure your MFPs, you need to ensure that it is capable of running up-to-date virus protection that speaks to your third-party software. You need to monitor your MFP (and your network!) for malware intrusion, and you need to be able to lock your MFP down both on a printing level and a scanning level.

MFPs are complex machines that are vulnerable to attacks if set up on a network, however, with proper network safety, an MFP will be just as secure as the computers it connects to.

Want to learn more about printers and MFPs?