The Inventor of VoIP - Marian Croak 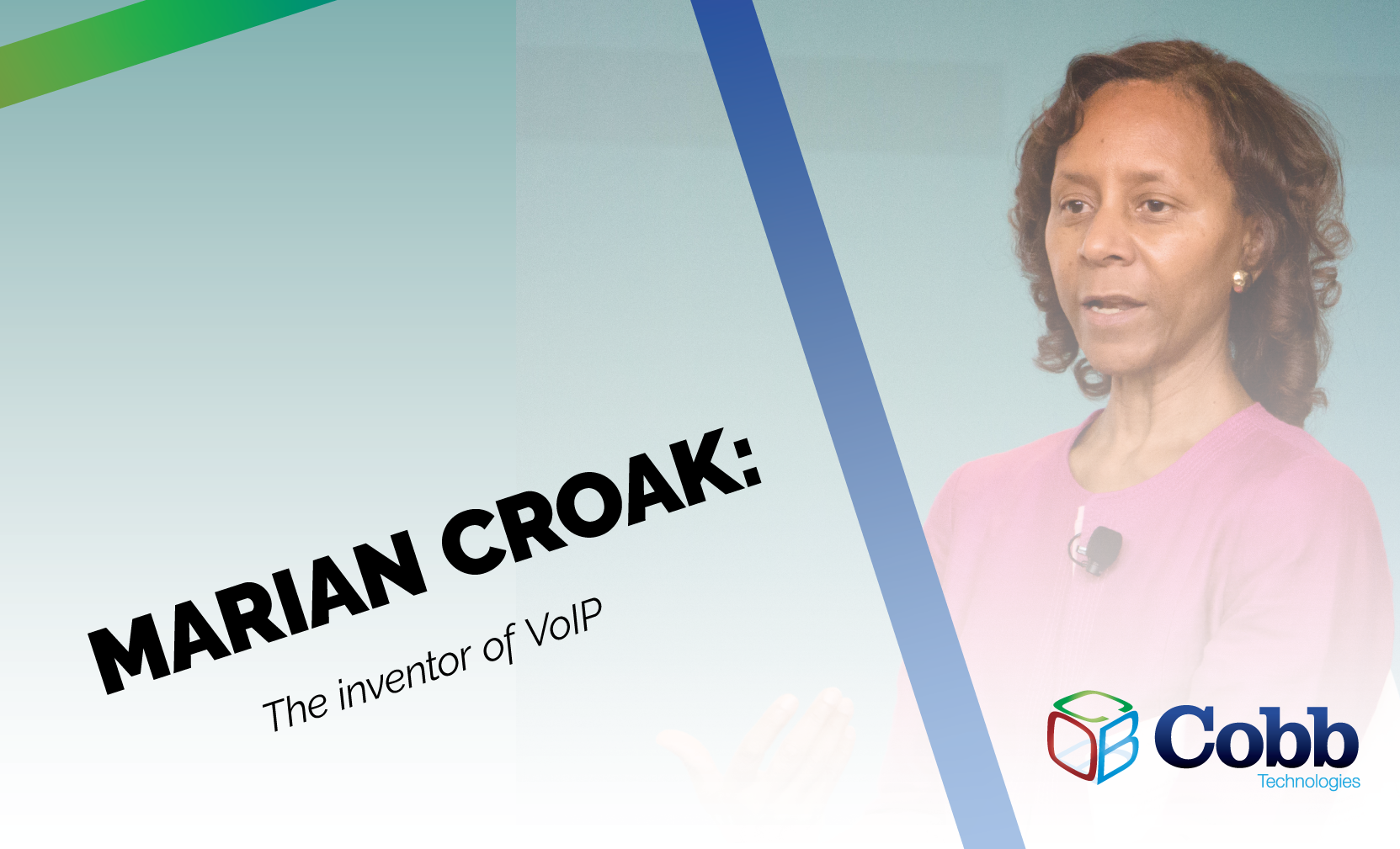 Only one year after the Supreme Court of the United States ruled that public schools must be desegregated in the landmark case of Brown v. Board of Education, Marian Croak was born.

It was thirty years later, while working for AT&T at Bell Labs, that she pioneered, envisioned, and planned the technology that is responsible for Voice over Internet Protocol (VoIP) phone systems. Without her skills and knowledge, VoIP technology may very well have faded into the forgotten technological past, as a forgone experiment.

Growing up as an African-American girl in 60’s New York City, there was very little privilege afforded to Marian Croak, save for her ingenuity, curiosity, and a supportive family. Despite growing up in a time when women — especially women of color — struggled to find acceptance and empowerment for achieving their goals and ambition, Marian Croak defied the odds, and not for her own personal gain.

Marian Croak’s ambitions focused on reducing the barrier of entry to quality, affordable communication for the masses.

After graduating from the University of Southern California with a Ph.D. in quantitative analysis (otherwise referred to as data science) and social psychology, Marian Croak soon began working for Bell Labs in 1982.

It’s important to put into perspective just how novel this kind of research was at the time — the earliest form of the internet would not come to full fruition until the next year in 1983.

Only fourteen years earlier, in 1969, was the invention of what could be described as the proto-internet, when two computers — one located at Stanford, and one in UCLA — connected to each other via satellite link. In 1970, the first permanent connections of ARPANET were formed, linking computers between Harvard, MIT, and BBN (the Raytheon-owned company that invented the “interface message processor,” which was the early interface for engaging with ARPANET).

In 1973, two years after the invention of email, ARPANET consisted of forty university and government computers on its network, including the Norwegian Seismic Array, which allowed Norway and the United States to share data about Soviet nuclear launch tests. During this time, email accounted for seventy-five percent of all ARPANET traffic.

This was the state of the “internet” when Marian began her work; albeit a bit more that 40 computers made up ARPANET by the time Marian started working at Bell Labs, but other than scale, not much had changed. In fact, it wouldn’t be until 1983 that DNS (domain name system) was invented. In 1982, if you wanted to connect to another computer via ARPANET, you dialed an IP address, not a website name.

Marian was at the forefront of this emerging technology. And while working with Bell’s Human Factors division, tasked with creating digital messaging applications, she found herself having to convince Bell Labs’ management that the technology that made ARPANET work had the potential to transform the way we communicate over distances.

At this time, Bell Labs knew they wanted to use the power of this new-fangled “internet” as a way to send voice, text, and video data digitally, rather than using a standard phone line — but the mechanism to do so was contested.

When Marian started her work at Bell Labs, the favored mechanism for this proposed system was Asynchronous Transfer Mode (ATM) protocol. However, Marian, along with the rest of her team, convinced AT&T to use TCP/IP.

To understand why this was an important decision, we’ll need to widen the scope of this story out a bit.

At this time, during the era of ARPANET, there were no standards for how information would be sent between computers. Imagine, for example, you were at Berkley’s computer lab, and you had dialed a computer at Harvard. Your connection would actually use the phone line like a regular phone call to send computer data across the country.

For those of us who remember dial up, these connections were four to five times slower. And, when your data was received by the other computer, it wasn’t a guarantee that the other computer could actually read it. Each university had its own email client, and they all used different methods to process information. To top it off, data could be sent using all sorts of various packaging processes, meaning if your computer didn’t know how to compile the received information, you were out of luck.

With the height of the Cold War, and the looming threat of Soviet missiles on the northern horizon, the US government found itself very interested in the reliability of the network that made up ARPANET.

When you hang up the phone, the circuit is broken. If you were to call the same number again, it might not use the exact same copper line as before, but the principle remains the same: for the duration of the call, your information travels across the same path of copper wire, every time.

ARPANET, on the other hand, did not use circuit connections. Instead, computers used routers to determine the fastest and most economical path to send information to another computer you had dialed into. If you’ve ever wondered why your router is named as such, this is why. They literally route packets of information across the infrastructure that comprises the connections of the internet, determining the quickest path every time.

The fastest path changes every time you send data to another computer. So, imagine you’re having text chat conversation on your computer. Your computer would take your message, package it up, and send it to your router. Your router would then determine the best path to send this package to the receiving computer. When the other computer responds to your message, their router will do the same. And because the best path changes in real time, your information will take a different route each time you press “send.”

So, back to the Cold War; the US government was very aware of the need to communicate and perform logistical operations in times of war. And they quickly realized that if a phone network hub was destroyed in a nuclear exchange with the Soviets, they would lose the ability to communicate from coast to coast, because phones rely on circuit connections.

If New York City was bombed, for example, and an army base in Maine was trying to call another base in Iowa, they wouldn’t be able to connect, because the network would have a gap. The circuit-based connection couldn’t exist.

ARPANET, however, didn’t have this flaw. Sure, it was slower than a phone conversation, but you could still send an email from Maine to Iowa without routing through New York. As long as one line remained intact, you could communicate with any other networked computer in the world.

It was also around this time that prominent users of ARPANET decided it was time for some regulations. The only way to ensure the users of ARPANET could communicate with each other was if the way information was packaged was standardized. This is when TCP/IP was invented. There were other ways to package data, but TCP quickly became the preferred method for ARPANET.

However, TCP was in no way set in stone. There was another major contender: ATM (Asynchronous Transfer Mode) protocol. But the US government liked the idea of regulations on how information was sent, and began to pump serious amounts of funds to help create an even more robust ARPANET. They didn’t care if TCP, or another method of packetizing information was used — they simply wanted to regulate communication to create a standardized system.

It’s important to note that the infrastructure that makes up the internet today did not exist at all. ARPANET was a fraction of a fraction of a decimal point compared to the size of today’s internet. And because of this, there were lots of ideas as to how best to send information between computers.

Unlike TCP, ATM made use of circuit connections. And as Bell Labs was the research division of AT&T — a phone company — ATM made more sense from a business perspective. They understood circuit connections. ARPANET and its open-ended connections were a foreign concept. So, rather than learning entirely new methods of packetizing information, and creating entirely new infrastructure, Bell Labs was heavily leaning towards ATM protocols for its new digital voice telephony system.

In fact, if you go research ATM, you’ll find research papers that reference VToA (Voice Telephony over ATM), rather than VoIP (Voice over Internet Protocol). Thank goodness, because VToA does not roll off the tongue.

Now, back to Marian Croak. At this time period of ARPANET and the beginnings of the internet, no one knew what protocol would win the day. But Marian believed in TCP, and with her knowledge, foresight, and expertise, convinced the entirety of AT&T and Bell Labs to switch to TCP. And the rest is history.

Marian wasn’t done inventing new ways for us to use technology, however. Over the course of her 32-year career at AT&T, she filed over 200 patents, one of which was the technology that allowed cellphone users to donate money to organizations using text messaging.

So, if you’ve ever donated money to a charity or cause through text, (or voted on American Idol), you can thank Marian.

Now, Marian works as the Vice President of Engineering at Google, where she is most recently responsible for ensuring AI projects are researched ethically, possibly one of the most important projects of her entire career.

One thing is for certain; the world would be a much less talkative place without the mind of Marian Croak. And for that, we thank her.