Why Does My Construction Company Need a Wide Format Printer? 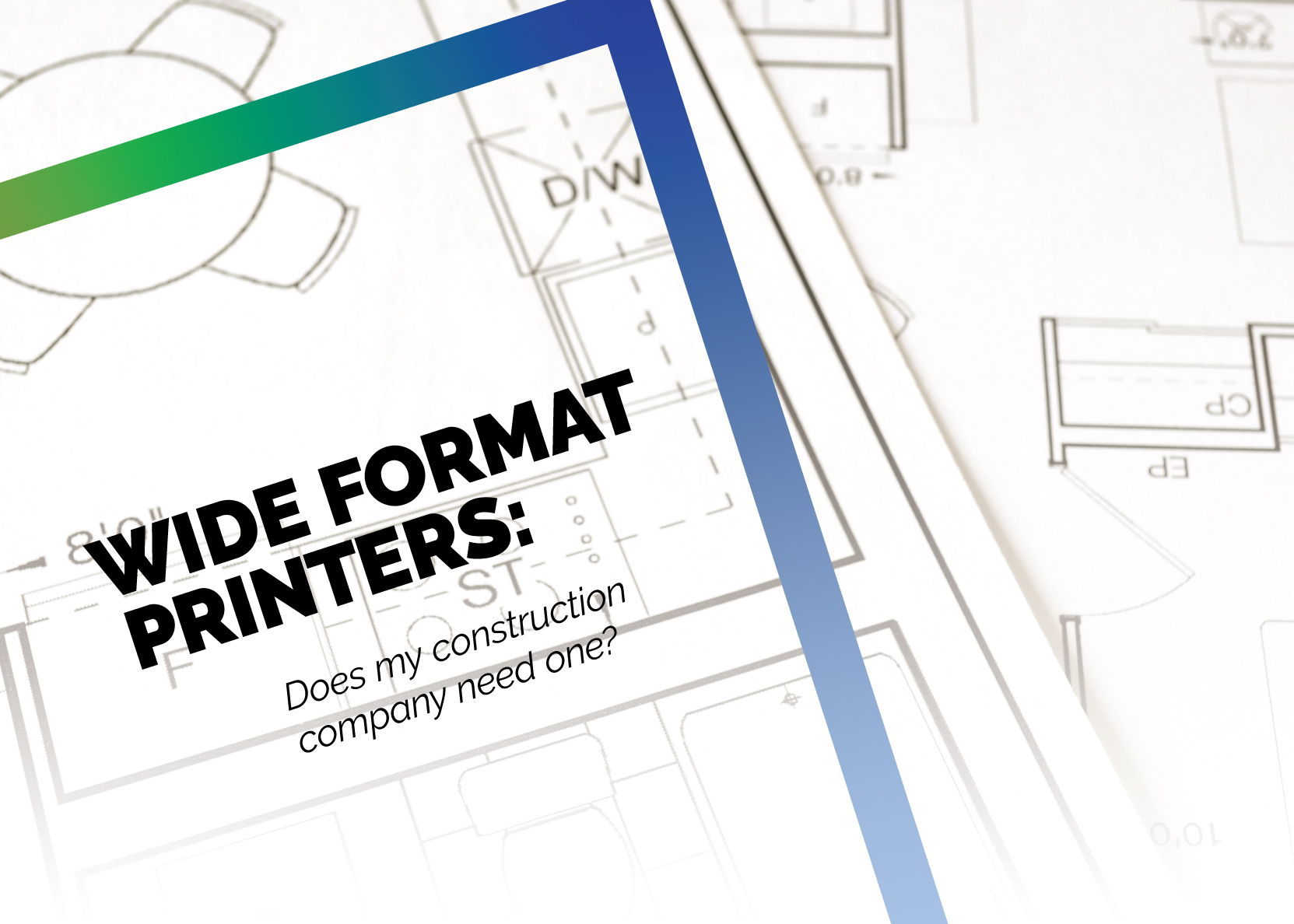 This is one of the most common questions I have received over my career in the industry. There are many options for outsourcing prints, so why would I ever pay for my own equipment when I can just pay for prints when I need them.

Sometimes the simple answer to this question is, “You really don’t need your own equipment.” However, many times the question is not answered so easily, and there are a range of factors to consider in determining the true value of having and controlling your own printing and scanning capabilities. These factors go well beyond the amount that outsourcing is currently costing. A brief list would include:

Let’s go over those below:

Yes, but not just for convenience sake. Convenience can be just another word for productivity and employee satisfaction. It is certainly not the ONLY reason to have your own printing and scanning capabilities, but it is an aspect that should be part of the total equation. The convenience aspect is great for check plots and estimating, as well as the ability to scan marked up or as-built drawings. Even if you plan to continue outsourcing large plan sets, as many people do, you can still take advantage of having your own capabilities for small jobs. Also, with the right equipment you would have the assurance that if required, you could easily produce your full plan sets if for any reason the local provider could not.

Another aspect that can be overlooked is that acquiring your own wide format capabilities can be advantageous in providing a work environment where employees feel empowered with the tools to do their jobs more effectively and efficiently. This can lead to a significant increase in productivity, especially in estimating. One more thing to consider is that in a tight jobs market, providing the right tools and support for employees can be all the difference between keeping good people or starting a grueling job search to replace a key contributor. For all these reasons, convenience, such as it is, should definitely be considered.

HOW MUCH SHOULD I BE OUTSOURCING TO CONSIDER MY OWN PRINTER?

This is the question I get most often, and most of the time the answer is not so obvious. Most people would start with looking at current outsourcing costs and compare it to the cost of having equipment in house. But the answer really depends on how much consideration you give to the other factors - hidden costs, convenience, employee satisfaction, redundancy, etc.

Let’s take a couple of typical examples. First, a mid-sized company outsourcing about 200 ‘D’ sized drawings per week. An entry level monochrome copier/printer/scanner with the speed and capability to produce that work can be leased for less than $700/month and that would cover all maintenance and supplies including paper. This would be very competitive with outsourcing costs. When you add the other factors to this financial justification, it makes the argument for having your own equipment extremely attractive.

But what if you are not doing that many drawings and not outsourcing that much? At about 50 drawings per week the same equipment as in the previous example would cost around $400/month including service and supplies. At a glance, this would not be as competitive with a local print provider. That is where the other discussion points provide additional considerations. What is the value of making sure your employees have the tools to be the most productive in their jobs? How much additional productivity can be achieved? What if your local print provider is unable to meet your needs? What is the importance of having the capability in house to avoid potential disasters? These are questions that only you can answer. But keep in mind that if you are doing any outsourcing at all, you will be justifying only a portion of the costs of your own equipment.

THE HIDDEN COSTS, A TRUE STORY...

I had just sat down for lunch when I got the call. It was from a customer that had recently installed their first wide format system. I picked up the phone after recognizing the number and instantly asked how everything was going. The system had been installed for less than two weeks and there are often questions and additional training required during the first month or so of implementation. I always expect to assist during this process. The voice was unmistakably one of the owners of the company, a mid-sized construction firm specializing in sustainable building. “You’re selling this machine all wrong.”, he said. I was a little shocked, after all, I’d been doing this job for quite some time. I got out a quick, “Excuse me?”, before the owner took over the conversation entirely.

The reason that I was “selling the machine all wrong”, he said, was that I spent too much time financially justifying the purchase based on outsourcing costs. It turns out that his construction company was outsourcing just enough to save a little money by bringing the printing in house. The customer then said something I’d never considered possible. “I more than paid for that machine in a single day!”, he said. I was pleased. But, also very curious.

The customer proceeded to tell me the saga of his last two weeks that are probably not unlike some of yours. Unforgiving construction schedules, delays, design changes, bad weather, late deliveries, and anything and everything else that could go wrong. So with a crew scheduled to be on site the following morning to try to make up for lost time, a last minute correction meant that additional changes were required, and the plans that he had were now out of date. New plans were received in electronic form well after the local print shop had closed for business. Because the customer had invested in their own printing capability, the crew was at work right on time the next morning with plans in hand. If the customer were relying on outsourcing, the cost would have likely been at least a whole crew for an entire morning until plans could be produced and delivered. The savings easily justified the printer in one day and meant that my customer made their customer happy!

I will grant that this is only one customer with one experience, but it is important to bring into focus the bigger picture where hidden costs can get lost.

IN CONCLUSION, ONE FINAL THOUGHT...

Just one more thing. Let’s face it. Printing costs, whether you have your own equipment or use a local provider, are a tiny fraction of the costs associated with projects. Whether you save an extra two cents per square foot or pay a few cents more, it will make little to no impact. Not having the capability to produce crucial plan sets in a timely manner, however, can add delays and significant costs to any project.